Catherine Morgan
Bird's Eye is an idea for a psychological shooter with a unique camera experience. The goal of the game is to shoot enemies, collect loot, and gain upgrades for your guns to progress through levels. 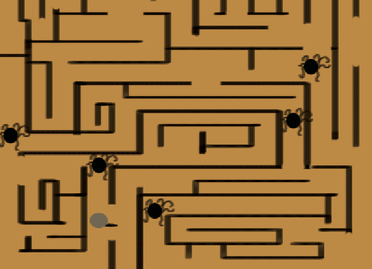 A sketch of what the first level might look like,
with the camera view looking down on the level
Initially the game will present itself as a fairly generic 3rd person shooter.  Kill the bad guys, get the loot. The camera will start in bird’s eye view, so the player is looking down on the scene. You see tops of heads, long twisted, tendrils and limbs of enemies, outlines of obstacles, and collectible items that aid you in your quest for safety. You kill enemies and gather items to reach the safety at the end of the level. Though this form of game play is somewhat generic, it implements a well documented reward system common to many shooters. There is pleasure in success and a feeling of power as you shoot down numerous enemies on your own.

As you progress however, the camera will slowly shift closer to what would be a first person, or over the shoulder, revealing more features and landscape. The lighting in the scene changes, and the music soon becomes more creepier and ominous. The player starts to sense that something is off; things don’t quite add up. Finally, as the game resolves, the camera shows the true scene. The outline of what you thought were just boundaries or mazes, are actually houses, and the enemies you have been killing are actually innocent townsfolk. The harder enemies you faced in later levels were firefighters and policemen come to halt the destruction you were wreaking.  You as the player have been killing the innocent, stealing from their corpses, and destroying their houses through the game. The player at this point should feel some amount of revulsion, as well as responsibility and guilt.  This will be conflicted however as the player realizes they weren't given the choice by the game, and were manipulated. Though this might have the result of removing the player from the game, ideally it will also inspire anger.  At this point the player is presented with a choice: they can then decide to continue forward to their sick end objective, to turn themselves in, or to take their own life.