Catherine Morgan
HACK is a card game created by me and Katherine Thornhill. It's 2-4 players, and generally takes about 30 minutes to play.

If you do something illegal for the greater good, does that make it bad? Ethical hacking can be an important topic for critical thinking in society. Many injustices have been brought to light because of people technically breaking the law and hacking to uncover the truth. For example, the Steubenville High School rape case or people hacking into large companies to expose stolen customer data. Some individuals will view this type of hacking as a justified action, social media tends to be more black-and-white about the ethics of hacking, and the judicial system can impose long jail times on hackers if they’re caught. Our vision is to pose the problem to the player that hackers have to go through when deciding whether they want to hack a certain “target” because it’s the right thing to do but risk getting caught by doing so. It’s a game based on strategy, inter-player cooperation, skill, and just a little bit of luck.

The world you live in is being run by deceptive scum: huge companies that embezzle money, governments that steal citizen’s information, social media that hides the truth. You've decided it’s time to take justice into your own hands by hacking your way into mainframes, personal computers and servers to obtain the information you need to expose the dirtbags. Increase your hacking level so you can hit bigger jobs, but don’t get caught because the consequences will be severe. 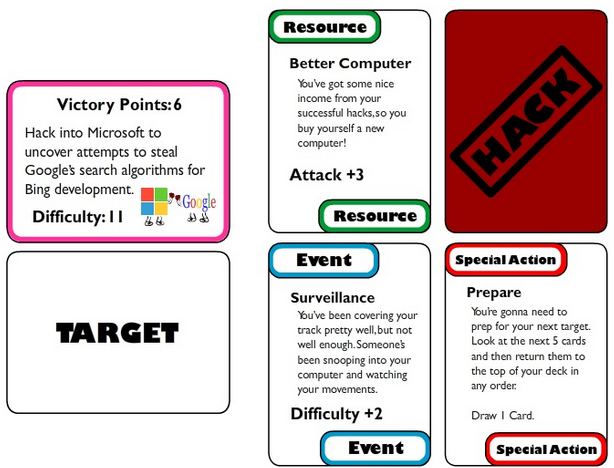 Every player has a deck of resource and event cards (some are good, some are bad)
Each player has their own personal hacking skill level - it will start at 0There is a deck of unique hacking scenarios
Player Turn
Proudly powered by Weebly