Catherine Morgan
Escape is a first person action game where you play a prisoner; you will be granted freedom if you can navigate through the maze to safety. Throughout the maze there are enemies, weapons...it's as if they want you to shoot your way out! This is insane.

Escape was developed by Katie Thornhill and I for our Game Design final. Katie built the world using models from the Unity asset store and I did all of the programming and sound design. Overall, this game was finished in about 2 weeks, taking over 45 hours of programming alone.

Play it Here
When my partner and I were brainstorming ideas for our final project, we knew we didn't have much time to complete the project so we wanted to make something that was a small map, but contained enough content to give an immersive, coherent experience. 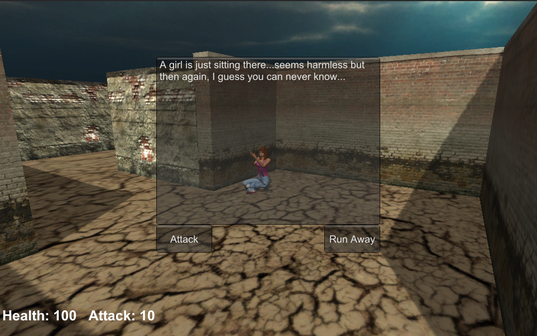 In our video game, we set out to make a game where the consequences of the player’s moral choices are internal.  Rather than have people respond to the player in different ways based on the player’s perceived morality or have the player’s appearance change, the player character’s own mind is warped by their moral choices.  We referred to this characteristic of morality as insanity in our discussions because the main idea behind what happens internally as a person continually chooses to be immoral is that they slowly lose their mind.  The player will start to see everyone that they come across as demons so that when they choose to kill them, it isn’t the player that is evil but the enemies.  The video game is in a way about people creating coping mechanisms for dealing with the darkness within themselves.  In many mainstream video games, the game world is dynamic in regards to the player character’s morality, but the player character’s own self is static aside from minor details like appearance.  We wanted to introduce a real change in the character as choices were made in the game rather than focus on the external.
Our game is worth playing because it approaches the issue of morality in a way that most video games do not.  It makes the struggle to do right or wrong have completely internal results.  This is more true to real life as one’s morality is not instantly recognizable to other people - it’s a battle that goes on within one’s own mind.  In addition, perhaps it will make players think critically on the effect of video games on their own mental state.  Many of us blindly kill anything in a video game just because it’s fun, but in a game where killing makes the player’s world scarier and more confusing, the player has to think about whether or not they really want to kill any given creature they come across.